What comes into your mind when Parkinson’s disease is mentioned? Almost instantaneously, you might imagine an elderly with constant shakiness who struggles to walk properly.

It’s true that Parkinson disease is a brain disorder that affects movement and most commonly seen in people aged 50 years old and above. The common symptoms are:

However, the impact of Parkinson’s disease doesn’t just stop there. It gets worse over time and can affect other brain functions, too, such as learning and memory. People with severe Parkinson’s disease can even lose touch with reality or see things that aren't there, this is known as hallucinations.

Parkinson’s disease can lead to problems beyond movement and cognitive functions, such as constipation, sweating, trouble urinating, trouble swallowing, and sexual problems. Some people with Parkinson disease get something called "orthostatic hypotension”, which they experience a sudden drop in blood pressure that happens when standing up. This drop in blood pressure can make the person feel dizzy or lightheaded, or even pass out and fall down. Depression is also a common sign among elderly who are suffering from Parkinson’s disease.

Unlike many other medical conditions, there’s no test for Parkinson’s disease. Instead, it is diagnosed by a specialist, who asks you questions about your health and medical history and observes your movement. Your doctor may want you to have some other tests mainly to rule out other brain conditions, so that the doctor knows the symptoms are not caused by something else.

Based on a report by the Department of Statistics Malaysia 2018, the number of patients with PD here is expected to increase fivefold from the current estimated 20,000 to 120,000 by 2040, partly due to the fact that Malaysia’s society is aging.

How is Parkinson’s disease treated?

Before we talk about how Parkinson’s disease is treated, let’s understand how it happens!

Although the exact cause of Parkinson’s disease is still unknown,

but scientists have made a good hypothesis that it has something to do with the lack of dopamine in the brain.

Dopamine is a chemical made by the nerve cells in the brain. Among many of its functions, dopamine helps to control movement. In people with Parkinson’s disease, these nerve cells slowly degenerate and lose their ability to produce dopamine. As a result, the symptoms of Parkinson’s disease develop gradually and tend to become more severe over time. It is not clear how or why these neurons stop working correctly. Most experts think that it’s due to a complex combination of genes and environmental causes. 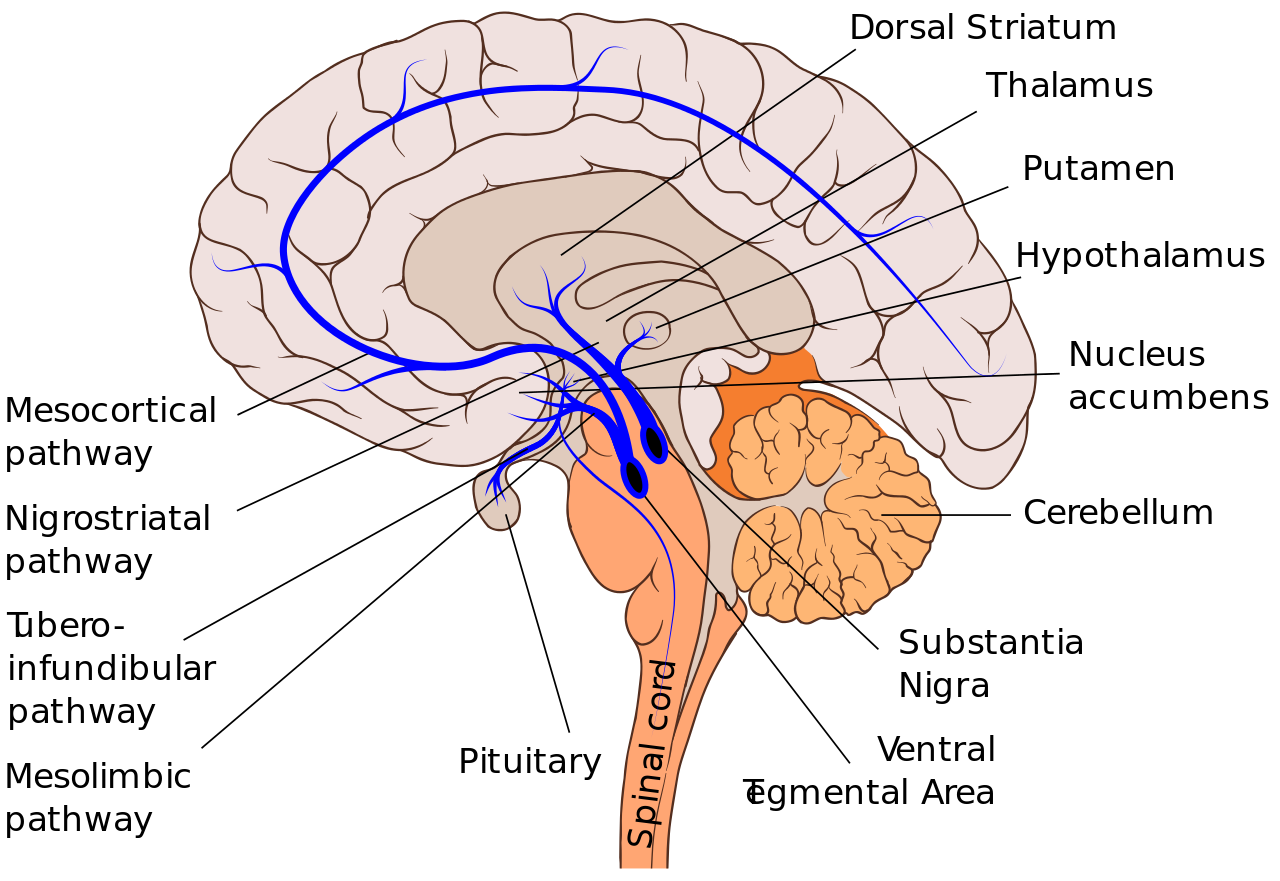 An illustration of the dopamine pathways throughout the brain. Image via User:Slashme; Patrick J. Lynch; User:Fvasconcellos, CC BY-SA 4.0 , via Wikimedia Commons

Okay, so if people with Parkinson’s disease lack dopamine, can’t we just give them dopamine?

That’s exactly how we’re treating Parkinson’s disease patients at the moment. There are six different types of medications that can be used to “boost” the dopamine level in patients with Parkinson’s diseases. But today, we will get into the most commonly used of all, called levodopa.

Levodopa is the most effective medication for the treatment of symptoms of Parkinson’s disease, especially if they're related to movement problems. There are several formulations of levodopa, and it is commonly combined with other compounds, called carbidopa and benserazide, respectively. Both carbidopa and benserazide have no medicinal use alone, but they are used to improve the efficiency of levodopa by making levodopa stays in the brain for a longer period.

Both products are available in different strengths and release patterns. This is to cater different requirements based on one’s Parkinson’s disease severity.

One caveat though, levodopa doesn’t work all the time. When levodopa begins to take effect, the person who suffers from Parkinson’s disease experiences periods of good symptom control (“on” time), when he or she can move and function well.

As levodopa begins to lose its effect (“wearing off”), the person may have periods in which symptoms are suddenly much more noticeable (e.g. more tremors and slower movement) and movement becomes more difficult (“off” time). This period is unpleasant, to say the least. Patients might even go to the other extreme and experience uncontrollable movements, called dyskinesias. This happens during the peak concentration of levodopa in the body. Such “swings” between various states of movement changes that occur throughout the day is known as “motor fluctuations”.

For someone who experiences the “on-off” effect for the first time, the switch from “on” to “off” happens gradually. The “off” periods are also more predictable and occur near the end of each levodopa dose.  For example, when they first begin treatment, many people are placed on a regimen of carbidopa-levodopa three times a day. Early on, when levodopa still works well, the medication lasts dose to dose, but over time the medication may begin to wear off 30 minutes to an hour before the next dose. At this point, the person may notice a gradual return of symptoms.

As Parkinson’s progresses, levodopa stays effective for shorter periods of time. This could be due to two reasons:

This means the person may have to take more frequent doses, and “off” episodes may become more sudden and/or unpredictable.

For some people, the “off” episodes can include non-motor symptoms as well, such as irritability (manifested as a lot of complaints), pain, anxiety, fatigue, mood changes, difficulty thinking, restlessness, sweating or drooling (from decreased swallowing). These symptoms are more subtle than tremors and slow movement, so it may be difficult at first to link them to a change in the effect of levodopa.

What to do about the “on-off” effect?

Every medication has its own “therapeutic window”, which is the period of time when a medication is effective. The same goes to levodopa — outside the window, the patient might get motor fluctuations (not enough medication) or dyskinesias (too much).

If you are caring for someone with Parkinson’s disease, and are currently facing the “on-off” issue, do work with the healthcare provider to adjust the medication. The goal is to ensure the level of levodopa in the body does not fluctuate too much, thereby reducing the worsening of symptoms during this period.

The doctor may switch the patient from an immediate-release formulation to a controlled-release formulation, in which the levodopa is released at a slower rate in the body. Doctors might also suggest switching to other medical therapies if necessary.

You can also help to observe the symptoms of the family member who is suffering from Parkinson’s disease, and keep the symptoms changes in a diary. Bring the diary during follow-up and share it with the doctor to see if there is a pattern to when Parkinson’s symptoms occur.

Parkinson’s disease can be daunting. If you have loved one who is suffering from it, your support and care are important to help them get through this difficult period. 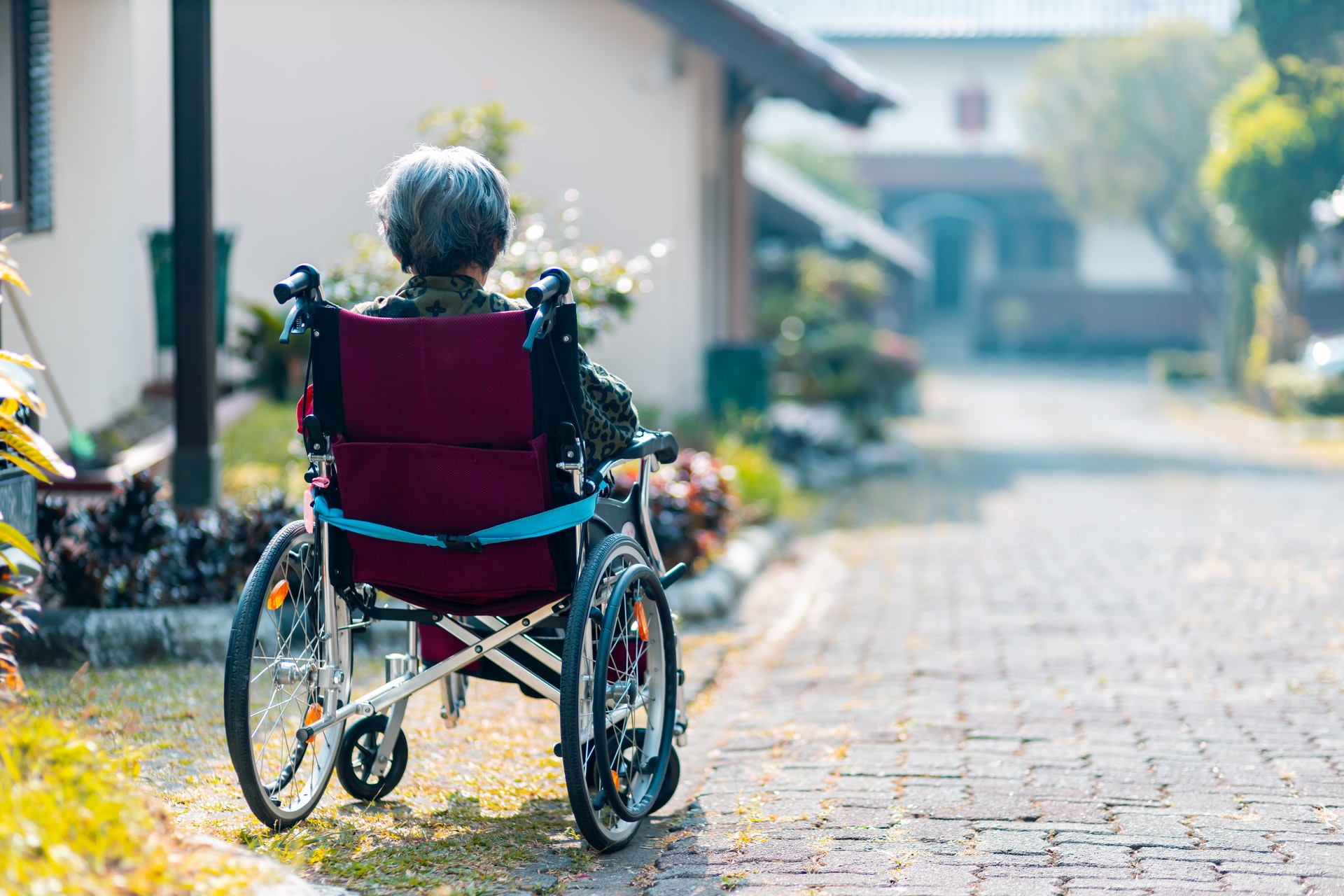