With the incident of covid cases normalizing globally including in Malaysia, we are hit with another deadly disease yet again known as the Naegleria Fowleri, commonly also referred to as the “brain eating amoeba” disease.

Although there are still no reported cases of Naegleria Fowleri in Malaysia as of today, our health director-general, Tan Sri Dr Noor Hisham has urged the public to be more vigilant and cautious when carrying out any activities that involve the use of freshwater. This is so after the Korea Disease Control and Prevention Agency (KDCA) has confirmed that a South Korean man in his 50s had unfortunately passed away on the 21st of December 2022 after being infected with Naegleria Fowleri. The man was reported to have resided in Thailand for four months before returning to South Korea on the 10th of December 2022 where he soon experienced meningitis-like symptoms such as fever, nausea and vomiting and a real bad headache.

What is Naegleria Fowleri?

Naegleria Fowleri is the name of the only Naegleria species that affect humans. Once infected, it may result in serious brain damage and swelling that often leads to death. This condition is also known as primary amebic meningoencephalitis (PAM) where it typically affects the central nervous system, primarily the brain and is almost always fatal. 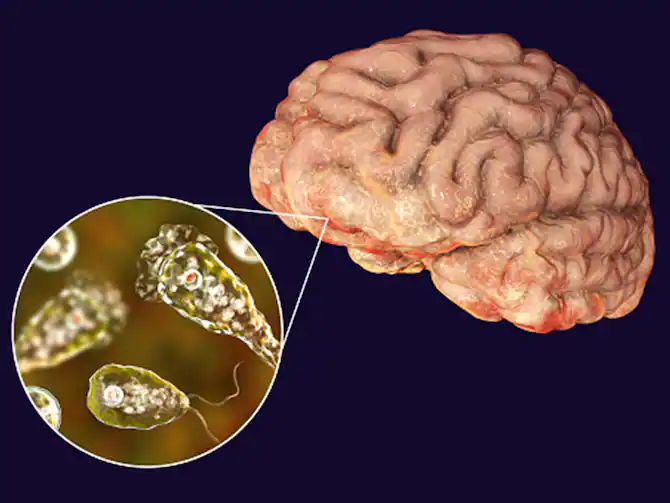 Where can Naegleria Fowleri be found?

Another thing you need to know about Naegleria Fowleri is it is a thermophilic amoeba or in simpler terms, a single-cell organism that thrives in heat and can survive in hot temperatures. They can be found all over the world; mainly seen lurking in freshwater habitats such as lakes, ponds, rivers, hot springs and even in soil.

How would we be infected with Naegleria Fowleri?

The most common way Naegleria Fowleri infects people is when they travel into your nose and eventually invades the brain where it destroys our brain tissue, causing brain swelling and potentially death. This scenario can be seen among seasoned swimmers, divers or in people who enjoy going for a dip where they have their heads under freshwater. Besides, Naegleria Fowleri can also infect people who may have used contaminated tap water to cleanse their noses during religious practices or to clean their nose with the contaminated water.

While this may all sound scary, good news is, you CANNOT and WOULD NOT be infected with Naegleria Fowleri by:

Studies have also shown that most of us have sufficient antibodies against the Naegleri Fowleri, suggesting that we may be infected with the amoeba but our immune system is strong enough to fight them off.

Can Naegleria Fowleri be transmitted from individual to individual?

No. Fortunately there have not been any reported cases found where the amoeba is contagious and can be spread from person to person. Studies however are still looking if the infection can be spread by tissue or organ donation.

What are the signs and symptoms of a Naegleria Fowleri infection?

Generally, the early signs and symptoms of a Naegleria infection that can manifest itself as early as 24 hours to 14 days after initial exposure to the amoeba include:

Later symptoms if left untreated may also lead to:

After the symptoms start to exhibit, the disease usually causes death within about 5 days (range 1–12 days).

Are there any treatments for Naegleria Fowleri?

Because it is a relatively rare but fatal disease, there are still limited studies and clinical trials performed to indicate the best, most effective treatment in eradicating Naegleria Fowleri. In current practice, the choice of treatment for Naegleria Folweri infection or PAM is the antifungal Amphotericin B which can be administered intravenously or injected in the area around your spinal cord. Combinations of drugs including Ampho B + Rifampin (antibiotic) + fluconazole (antifungal) + a newly FDA approved drug, Miltefosine that is used to treat leishmaniasis, a parasitic infection caused by sandflies has also been used and proven effective in managing PAM. Additionally, cooling the body to below-normal temperature either by Paracetamol (ie: Panadol) has also been seen as useful to treat brain swelling.

How can I Protect Myself Against Naegleria Fowleri?

As we’re living in one of the most tropical countries whose weather is hot most of the time, it's always wise and highly encouraged that you exercise some precautionary measures especially when you spend most time in freshwater. As a whole, personal actions to reduce the risk of Naegleria Fowleri infection should be focusing on preventing water from going up the nose and these are:

What Should I do if I have been swimming or playing in fresh water with some signs of PAM?

Although Naegleria Fowleri infection is fatal, its incidence is still very rare. However, should you or anyone you know exhibit symptoms such as sudden onset of fever, headache, vomiting or stiff neck after being in warm fresh water recently, it is highly encouraged that you seek for immediate medical care to get PAM ruled out and/or treated accordingly.

How much sugar is too much in your CNY beverages?

Anti-diabetic Jab is not the Magic Solution for Weight Loss

Anti-diabetic Jab is not the M...

5 Ways For People With Gout To Enjoy Hotpot

Stockholm Syndrome: Is It Real?

How to Prevent Macular Degeneration

How to Prevent Macular Degener...