Our immune system plays a critical role in transplantation. The complex mechanisms of immunity, which under normal circumstances work to identify foreign bodies (e.g. microorganisms or cells that do not belong to us) and direct the immune system to destroy them, pose a significant barrier to successful transplantation.

Immunosuppressants can be further divided into two categories:

Here are some commonly used immunosuppressants following an organ transplantation:

Cyclosporine prevents organ rejection by inhibiting interleukin-2 and lymphocyte activations, both of which are critical players of our immune system. Typically, cyclosporine is taken twice daily (every 12 hours) on an empty stomach, i.e. 1 hour before meal or 2 hours after meal.

You should always strive to take cyclosporine consistently, at the same time every day. If you happen to forget a dose of cyclosporine, take it within 4 to 6 hours of the original prescribed time. If it has been more than 6 hours, skip the missed dose and return to taking your dose at the original schedule next day. Do not take a double dose to make up for the missed dose.

Some potential side effects associated with cyclosporine are:

Tacrolimus works similarly as cyclosporine. However, unlike cyclosporine, tacrolimus is available in two different formulations, namely the immediate-release (IR) and prolonged-release (PR). If you’re taking IR tacrolimus, it is typically taken twice daily; whereas it’s an once-daily dosing for PR tacrolimus. Both formulations of tacrolimus should also be taken on an empty stomach.

The appearance of IR and PR tacrolimus can be confusing, make sure you remember correctly which type of tacrolimus you’re taking, as both of them are different and not interchangeable!

There are a few side effects associated with tacrolimus treatment, such as:

While cyclosporine and tacrolimus are widely used in organ transplantation, a huge concern of both is kidney toxicity. Everolimus is an eligible alternative to both and has gained increasing popularity recently. Everolimus reduces the activity of immunity by inhibiting interleukin-2 signalling, lymphocyte activation, as well as mammalian target of rapamycin inhibitors (mTORi), thereby reducing risk of organ rejection.

Similarly, everolimus is usually taken twice daily on an empty stomach, and it needs to be taken within 4 -6 hours of missed dose. Skip the missed dose if more than 6 hours of the prescribed time and resume original dosing time the next day, do not double dose to make it up.

Possible side effects of everolimus include acne, nausea and vomiting, abdominal pain, body swelling, and urinary tract infection (may be manifested as increased sense of urination or burning sensation when urinating).

Mycophenolate is another commonly used medication to reduce risk of organ rejection. It works by inhibiting inosine monophosphate dehydrogenase (IMPDH); as a result, both T- and B-lymphocytes cannot replicate themselves and thus cannot damage the new organ significantly. 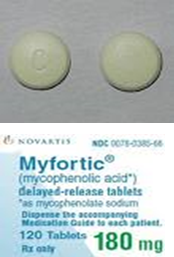 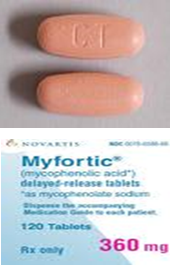 Mycophenolate is available in two different forms that go by the brand names of Cellcept® and Myfortic®. Both are in different salt forms and have different strengths, although eventually they will be converted into mycophenolate in the body. Similarly, they are taken twice daily on an empty stomach, and can be taken within 4 to 6 hours of missed dose. Skip the missed dose if more than 6 hours of the prescribed time and resume original dosing time the next day, do not double dose to make it up.

Mycophenolate has poor oral absorption. Therefore, it is also important to not take any antacids (liquid medication for gastric or heartburn) within 2 hours of taking mycophenolate, as it can significantly reduce the absorption of mycophenolate.

Mycophenolate can lead to the following side effects: 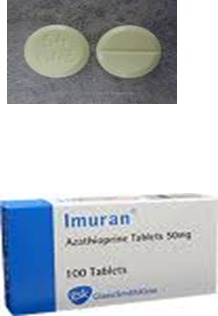 Azathioprine inhibits the purine nucleic acid metabolism, which also helps to reduce the numbers of lymphocytes, thus reducing risk of organ rejection. Azathioprine should be taken in the morning immediately after breakfast to prevent stomach upset. If you missed a dose of azathioprine, take it within 12 hours of the original prescribed time. Skip the dose if it’s more than 12 hours, do not double the dose. Side effects of azathioprine include:

Azathioprine can interact with some medications, thus affecting its level in your body and how it works. Inform your doctor or pharmacist the other medications you’re taking, such as allopurinol (for gout), Bactrim (an antibiotic), and warfarin (a blood thinner).

Prednisolone is a corticosteroid that has a wide range of use in medicine, even in preventing organ rejection following transplantation. The strength of prednisolone is 5mg, and is available as a tablet.

Similar to other types of steroid medications, prednisolone should be taken in the morning immediately after breakfast to prevent stomach upset. If you missed a dose of prednisolone, take it within 12 hours of the original prescribed time. Skip the dose if it’s more than 12 hours, do not double the dose.

Prednisolone does come with side effects, such as:

Besides the immunosuppressants mentioned above to prevent organ rejection following transplantation, patients may also require the following medications for reasons other than reducing organ rejection. 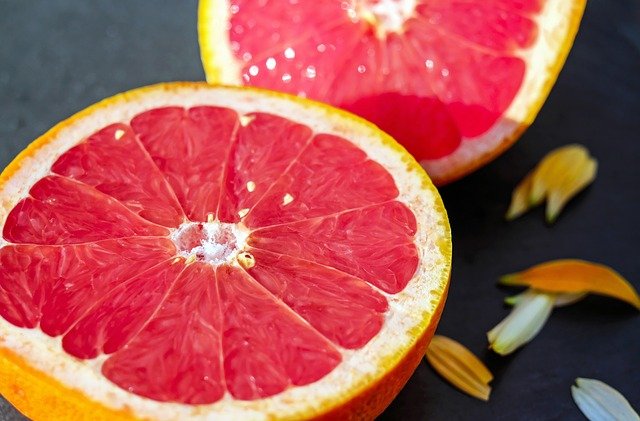 Image by Couleur from https://pixabay.com/?utm_source=link-attribution&utm_medium=referral&utm_campaign=image&utm_content=1647688">Pixabay

Does the brand of COVID-19 vaccines matter?

It has been exactly a month si...

How to Prevent mosquito bites

In collaboration with Dosi...

All you need to know about Japanese Encepahlitis

What is Japanese Encephalitis?...

Are the COVID-19 vaccines effective against the variants?

Episode 33: Medications that can cause falls

Wisdom Teeth: Should I remove them?

What is a wisdom tooth? Wis...

Medications that can cause falls

Do not underestimate the dange...

Why do I always sweat so much?!